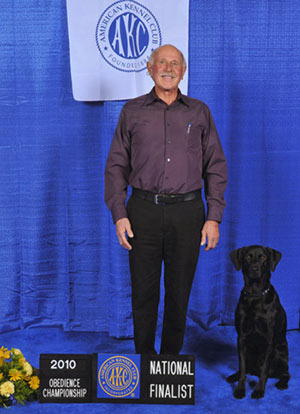 Roger specializes in pet obedience training, but he also has extensive experience in and has competed in field, tracking, agility, rally, and therapy dog work. He is also a licensed HRC (Hunting Retriever Club) hunt test judge. He has titled dogs with the American Kennel Club, United Kennel Club, and the Canadian Kennel Club. Roger and his wife Jaci have titled 5 “Utility” dogs, 4 “UDX” dogs and 2 “Obedience Trial Champion” dogs. Roger and his dog Kihei were invited to and competed in the AKC/Eukanuba Nationals Obedience Classic in 2010 in Long Beach, California and in 2011 in Orlando, Florida. This is where the top dogs and dog trainers from all 50 states square off to see who the best is. Roger and Kihei have respectfully placed in the top 30 in both 2010 and 2011.

Roger has trained with many nationally known trainers; Bob Self, Judy Howard, Connie Cleveland, Terri Arnold, George Hickox, Mike Stewart, Mitch White and many others. Roger, his wife Jaci and their four Labrador Retrievers, Mocha, Kihei, Nestle, and Buddy are very active in the dog training world. They compete regularly and travel coast to coast competing and gaining education in the dog world.